You long-time HTP readers know that I am a fan of Dave Bidini's book "The Tropic of Hockey." The thought of a pilgrimmage to find the game of hockey in some of the most-remote corners of the world (from a Norte Americano's perspective) is somehow wonderful and thrilling to me. Interestingly, it is apparently possible to do so without leaving the comforts of my own country, as I found out last week on a business trip to Texas.

I visited the cities of San Antonio, Austin and Houston, each for the first time. While the days were busy (that was the work part, and those Texas boys - and girls - apparently know and like their munis!) and started early, I managed to find some hockey (related fun) during a couple of the evenings.

While San Antonio was bereft of hockey (I love asking cab drivers things like "Hey, how's the Rampage doing?" and watching them struggle between their desires to keep the BS meter running and not completely show their ass), things picked up dramatically in Austin.

I was met by a good pal who - get this - flew in from Denver to hang with me in Austin...for the night. He was on the ground for about twelve hours. God love ya, Pags. But he's a fellow beer league goalie, and we have had several great hockey adventures together over the years. So we immediately raised the level of hockey discourse.

Then, I was psyched to meet fellow Russotans AustinTXwildfan and his wife WildinATX. The "Austins" (as they're affectionately known in the Wild online community) are just great human beings. They were great hosts and really did credit to their current hometown by showing Pags and me the sights. Okay, they showed us about four bars (our choice) but we had a great night - and there was a lot of hockey talk going around. Well, and some drinking. But we definitely talked a lot of puck. 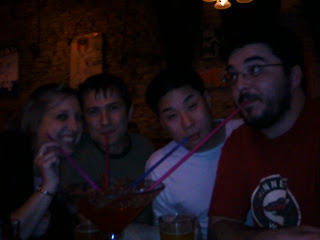 WildinATX, Pags, NiNY and AustinTXWildFan getting into the
"spirit" of Austin, TX with a "Helldorado"

Next up, an early flight to Houston where another long day of meetings was all that stood between me and an introduction to the one and only Ms. Conduct. And it was a two-fer since I got to meet Mr. Conduct as well. Not only that, but these good Americans took me to an Aeros game. Okay, so I totally confused the valet at the hotel and the cab driver by asking them where the Aeros played. And it's clearly a Texans and Rockets town, and that's probably to be expected. But the Aeros drew a crowd of loyal die hards that, while not large in number, was vocal when it needed to be and knew what was going on for sure.

I, you may recall, saw the Aeros play in person once earlier this season. And it was a less-than excellent effort from the Houston squad. Well this night (against the Grand Rapids Griffins) was a whole other story. I missed the first period, but the second and third were great exhibitions in opportunistic hockey, solid defensive fundamentals, good offensive capitalization and solid goaltending. Ms. C and I agreed that if the Wild played like how the Aeros played in that game, the Wild would be in much better shape this season, standings-wise. I met John Royal and Fred Trask through Ms. C, and the whole in-game experience was a blast. 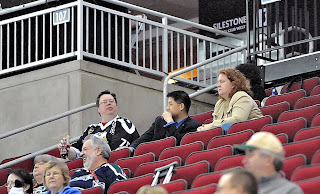 But, really, the highlight of the night was meeting and chilling with the Conducts. Just super people. Smart, funny, cool, hockey-smart...what more could you ask for? After the game they took me to The hockey bar in Houston, and we ultimately watched the second period of what ended up being a monumental comeback for the Wild against the Sharks in San Jose.

And that's really what hockey's all about. After the game's over, and the gear is back in the bag, it's hanging out in the parking lot, drinking beer and BSing with your pals that makes hockey more than just something you do late at night on a work night.

The Conducts and the Austins are just great ambassadors for the sport of hockey, in the non-traditional market of Texas. I am happy to have made their acquaintance, am indebted for their hospitality, and look forward to more fun experiences with them in the years to come.

You sir, are a lucky bastard. I will leave it at that.

Maybe next time we will have a little more time to hang out. It was a good time for sure.

Nice article. Good to read that Mrs. C took care of you.

Too bad Dan & Mike weren't there too! LOL

You look very dapper in that picture.

No, I mean the first one.

He's a dapper fella, lemme tell ya. And as smart and funny and lovely as you would expect from Nick's online personality. It was like meeting an old friend, really. Very nice. I love hockey people. Haven't met a bad one yet. And the Aeros picked it up when Nick got there so I'm naming him 3rd star of that game. ;)

Thanks for finding your way down here, Nick! It was a pleasure!