Mason here with an (A)DB--NiNY-style but I'll refrain from using too much legalese and French words. The French... Ish.


What you need to know today.

4 STL v 5 LA:  This is destined to be the most physical series in the Playoff
3 VAN v 6 SJ:  I'm hoping this is another physical series, but that no one makes it out alive.
2 ANA v 7 DET:  If anyone can plug Analheim's success this year, it's Detroit.
1 CHI v 8 MIN:  We're fucked.

I couldn't believe it, but apparently I was making some small amount of sense during last night's The Dump In. Or at least Stranger and NiNY were just placating the drunk guy. Anyway, we all agreed that the only way the Wild are going to get a single out of this series is if they heavily employ their very own bane: physicality.

The Wild have shown that when a team takes the boots to them, they can't handle it. They've also played their best hockey when playing an aggressive physical game. The Hawks aren't the toughest, most aggressive team; they pass on pummeling faces, opting instead to pummel nets with pucks. So if we're getting one win in this series, I'm looking at a jacked up Xcel crowd and a jacked up Wild team in Game Three. Then again, Edmonton v Wild 6-1.


Already Looking Past the Playoffs

If and when the Wild lose 4-0 or 5-1, what's the best way to spin it? I think a lot of us are happy enough that the team made the playoffs in the first year of the new Parise/Suter era--and no one's happier than Yeo, as this achievement may have saved his job. It seems to me, too, that especially with how far the guys slid down the board and sucked their way into playing the Hawks, everyone is happy to accept the impending doom and call it a successful season. That whole deflection of guilt kinda rustled my jimmies, though. 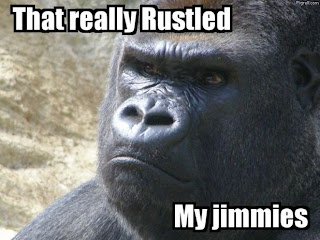 I'm definitely guilty of the above. I'm one of those playoff-content rubes. But that seems like enablement. This year, this team showed that they were capable of making any team nervous. They overtook 1st in the NW, held it for a bit, gave it back, took it back, and hung around for awhile before the stretch spiral to 8th seed. So it's a consistency issue, right? How?

Is it coaching? I'm hesitant to admit that, because then I'd be indirectly agreeing that coaching had anything to do with the Blue Jackholes' amazing stretch run--and I ain't goin' that far.

Was it our goal tending? No. I don't want to imagine what this season would've been like without Bax playing as well and consistent as he's been at times.

Is it our leadership? Aside from Bax, I'd say our leadership (let's say Koivu, Parise, and Suter) have been the second most consistent thing. But if you actually have to type a sentence like that, then the proof is probly in the Jello Pudding.

Then what? I don't think I have the answer. Maybe our inconsistency is rooted in, as the French say, a certain jenny-sack-wah or WhateverTF. Or maybe the answer's obvious but I'm just trying too hard to fit in a fake French word. le Meh.

I hope they're up for the challenge, though. Because, like, that a lot of people they'll need to convince.
Your Author: Mason at 11:09 PM

Mike is on a lifelong quest for truth and enlightenment. He writes about hockey because the 17th docent of the Order of Sharma told him to "seek the puck.".

Mike can be reached at: mnberg@gmail.com
Mason...you don't really want to mess with Mason. He's nasty with the writing skillz. And can drop some ridic culture pulls into his narrative. Lover of haiku.
Mason can be reached at: jaredmas@gmail.com
Did you know that no two zebras' stripes are the same? Well we have a zebra here at HTP, and his name is Doubles. Only he's a hockey zebra - and he's here going to share his great wealth of hockey knowledge from an on-ice official's standpoint with you. Feel free to read him in Chris Rock's voice.
Doubles can be reached at: lproech22@yahoo.com