It's a beautiful day

Especially if you're a Wild fan.

Wait. Before I continue, Doug Risebrough has asked to add his two cents: 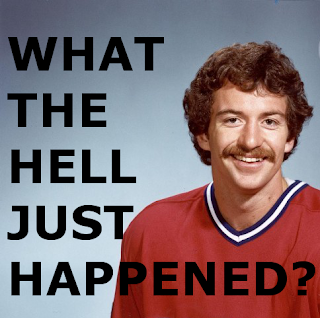 The book on Pominville is that he's a leader, can be a playmaker or scorer. Primarily a winger, and he has a year left on his deal.

Larsson is also a leader and playmaker, and Hackett was once seen as the goalie of the future.
I like this deal. By adding Pominville, Chuck Fletcher adds another player who has put up good numbers at the NHL level. He also added another captain to the roster - leadership being important in the playoffs and in developing the youth of the Wild.

On the other hand, Hackett has left me underwhelmed this season. His numbers in Houston have been shaky and he didn't look good in his one start. Larsson hasn't gotten much of a look, but as a center, he had to know that with Koivu, Cullen, Brodziak, Konopka, Granlund, and, arguably, Zack Phillips were ahead on the organizational depth chart.

Look, assets either need to develop or be used to make the team better. I don't even feel bad about the draft picks. The first is a big price, but the Wild still have staggering depth among its youth. And with Brent Flahr manning the draft table, the Wild would be hard pressed to have a bad draft.

The most important part of this deal is the year remaining on Pominville's contract. That tells me Fletcher sees Pominville as a long-term piece of this team, and intends to keep him beyond next season. This isn't a rental deal, this is a good deal that strengthens the Wild and make the team better beyond tomorrow.