Some people might want to forget this game on an otherwise great day for the Wild, what with having the surplus assets on hand to significantly upgrade their team by adding Cap’n Pominville to their 1st line’s RW. If you ask me, silver linings are for coffins; I prefer to stay away from both. Fact is the Wild have been beaten badly in the last two games.

We here at HtP have opined that the team which won seven games in a row did not look like the team everyone thought they’d turn out to be, which would finally drop that last shoe and go back to being pushovers. I don’t know if that’s the case; all I know is these last two games have been anomalous compared to the rest of this season’s body of work.

Good god—a realization. What has been different? Constant lineup changes. Bret Clark comes. Prosser plays wing. Cullen goes down. All that chem from the seven game winning streak—largely done with an unsullied lineup—has been scattered into a Periodic Table of Elements organized by my cats. 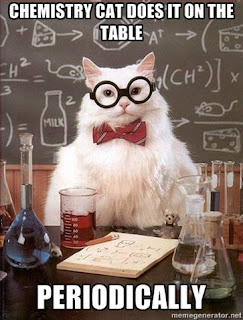 Sure, pelvic-thrusting Pominville onto the top line blurs the lower lines even more, but he couldn’t possibly be subtraction by addition, could he? I don’t know. I’ve always been shit at math. We need that to transition smoothly; we need even Stevens in our D pairings; we need Heater to not be as injured as he looked after Vlasic pickled the shit out of him; and—God damn it, February Mason would smack me for saying this—we need Matt Cullen back. There I Fn said it. Are you happy?

Below are tonight’s haiku, despite being inspired by a game lacking of any poetry.

Jason Pominville,
please do not suck, makes me miss
my swede Johan Larsson.

Of all guys, Havlat?
What next, Burns gets a hat trick?
(Please don't be a jinx.)

Did Chuck Fletch barter
all our players' brains and hearts
for Jayce Pominville?

Hey, how about that?
Linesman tosses our center.
Take a drink, bitches.

So far, haiku'ing
to MFn golf would be
far more inspiring.

Limp, flaccid hockey.
Is there enough Cialis
in the world? ... Boners.

Californ'ya "ice."
Made by trolls from unicorn tears,
glitter manes, and dick.

Are forfeits allowed?
Just rest up well for LA
and call this one done?

That highass Stoner
is back in the box again.
Bear paw stung again.

Clear the Fn puck.
The Fn puck must be cleared.
Fn puck: clear it.

Time to sit Stoner.
All mighty bears hibernate
(and he's not mighty).

Is Suter tired?
Do trees tire, arms ever stretched,
carrying their team?

Flaccid evidence:
Constant minor penalties.
Smoke and fire and such.