No body does jersey news better than Icethetics. According to them, the last set of sneak peek pics were erroneously leaked by the Wild themsevles (and discovered by @andrewpheil). Kinda embarrassing for the Org. Way to go, bros.

Icethetics, though, brings up an interesting point that perhaps it was intentionally leaked. If the Wild are jazzed about the new whites, then getting some more images circulating a full day prior to the unveiling perhaps generates more interest, more viewers at the State Fair tomorrow, and ultimately more sales. 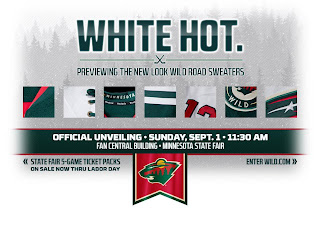 Obviously, we've only got these teasers to go by, but from what I can see I'm looking forward to them. Looks like the dated giant green stripe from cuff up across the shoulders to cuff is gone. And I'm also glad to see the large logo has been retained rather than going with the logo-in-circle for the main crest.

The new roadies also perfectly timed for the new division. But we'll still have to score while wearing them, which has never been easy regardless of the jersey. So yeah.
Your Author: Mason at 7:00 PM No comments:

So, we were extremely excited to participate in Puck Daddy's NHL League of Nations project, representing the Wild. It was a fun exercise, plus we got to tweak Canucks fans and the provincial Minnesotan set as well - always exciting.

Then, we got together to discuss and defend - or not - the picks. For your listening pleasure:

I have to say, that I really don't like throwing my friends under the bus.

On the other hand, Mason really blew it when he didn't give proper props to Antti Miettinen. 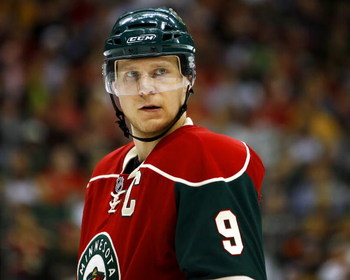 When this guy says "Get your fuckin shine box," nobody moves faster than Antti Miettinen.

If you saw Puck Daddy's feature on Wednesday about the Wild's NHL of Nations, you might be wondering where Dany Heatley is.

He's looking for the missing "n" in his first name.

While he's busy, let's look at the numbers. In a Wild uniform, Brunette and Heatley have the following numbers:

Brunette has scored at a 0.24 gpg clip, Heatley 0.30. Heatley is fifth best among Canadians, fourth best if you toss out Bill Muckalt's 5 goals in 8 games. Brunette ranks seventh (or sixth).

Brunette has helped out others to the tune of 0.41 assists per game, Heatley 0.33.

In terms of raw talent, Heatley might be a better player, but in a Wild uniform, no Canadian player has better numbers - and impact - than Andrew Brunette. (Adieu, Monsieur Roy!)
Your Author: Mike at 7:30 AM No comments:

In response to Nick's concern about Matt Cooke, I'd originally planned in my mind a vast, wide ranging discussion of players that have proven themselves, players who are talented but have not yet won, and players we might hate but never have won anything and probably never will.

But then when I started writing, I realized that I'm making it a lot harder than it has to be.

Chuck's job is not to win a Cup for the Wild, his job is to put butts in seats and see to it that Uncle Leo makes money. Popular players - million dollar smiles, perfect hair and local ties - don't win Cups unless they have the skills to go along with the other bona fides. And Mark Parrish's popularity waned because he's a bad team goal scorer - a player who scores the goals for bad teams, because someone has to. He might have been an agent of putting butts in seats initially, but his inability to make the Wild demonstrably better was ephemeral, and the fans responded (if my scanning of message boards at the time is accurate).

The name on the Cup doesn't make Cooke a natural winner, nor does it make the Wild an immediate contender, but one can hope that he can be a leader in the room with the Zuckers and Coyles, who can provide an additional voice of experience, a calming voice, a motivator who can talk about what it's like playing in the highest levels of hockey.

A team needs the stars and the role players. The free agents you go and get need to be a mix of popular, skilled, and proven.  Guys like Zach Parise and Ryan Suter qualify as popular and skilled. Cooke qualifies as proven.

Cooke's past? That's a problem, and I'll be the first to call for his head if he reverts to his old bullshit. You can say I'm cheering for laundry, and I'll own that.  But the dude deserves a chance. And it's a fact that he's a guy who's been there when his team has won the biggest prize in hockey.

Now, if Chuck had signed Alex Burrows? Demonstrably unpopular among Wild fans, skilled only in being an asshole (the only time he's been productive in the NHL is when he's playing alongside the Sedins), and who's never won anything except the Psycho Olympics? Then we'd have a problem.
Your Author: Mike at 2:49 PM No comments: