It's been a few weeks off, as I've been traveling and scouting the hockey broadcasts in Columbus Ohio and Hazelton, PA.

I wanted to discuss advanced stats. There's been some talk lately about the Fenwick Close rating that a Calgary Flames fan named after himself. While that's something a native Minnesotan would never dream of, it's still something interesting to look at.

I think this analysis makes a good point.

Then again, I compiled data from 2008 to 2012 and plotted points against Fenwick Close scores: 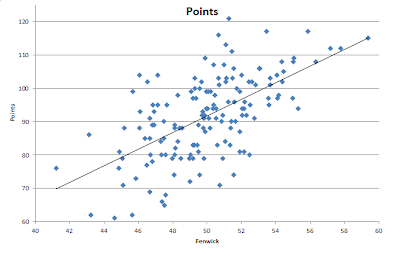 But I think what it does is give Wild fans an explanation for what we've felt the last few years. Several times the last couple years, Wild fans have known their team was playing above itself and winning games that by rights it should have lost. Conversely, this season, the Wild have lost some games that fans felt they should have won.

Should I, as a Wild fan, expect the Wild to continue to win? Only insofar as putting a good product on the ice. Can I, as an armchair analyst, hang my hat on an advanced stat to prove this team will make the playoffs? No.

Fenwick might be good as a retrospective tool, to try to suss out why certain teams have been good in the past, but all we can get is a correlation, not a predictive tool. It may give us hope, but I wouldn't take it to Vegas. As we've seen, there are other factors, ( *cough* Dany Heatley *cough* ), that can affect the team's ability to win games.
Your Author: Mike at 11:43 AM

There are some good visualisations of the correlation between good Fenclose numbers and playoff success in this article here: http://www.habseyesontheprize.com/2013/4/4/4178716/why-possession-matters-a-visual-guide-to-fenwick

There are some outliers, but the overall correlation is pretty strong.