Watching the game last night, I was reminded of this picture of young Messrs. Richter and Vanbiesbrouck: 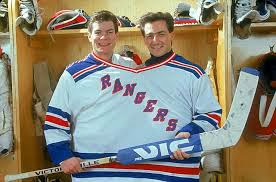 The Wild has managed to stitch together a Frankstein's monster of goaltending from partial season performances from Harding, Kuemper, and Backstrom this season. In totality, it has resulted in a plus-season defensively: 7th-best goals against per game (2.38), and Harding still sits at (GAA) or near (SPCT) the top of the major goaltending statistical categories - other than wins and shutouts - despite not having played yet in 2013. Kuemper has assumed the mantle of starter recently and is currently tied (with MA Fleury) for 21st in GAA and 18th in SPCT (I don't think he's played enough to qualify for league leader rankings).

For this cumulative performance, the Wild is paying Backstrom $3.416M, Harding $1.9M and Kuemper $776k against the cap. That's a rough total of $6.092M, which, frankly, isn't utterly ridiculous. As much as Wild fans like to think otherwise, the dollars for Backstrom are reasonable. And the dollars for Harding are terrific - when he plays like he played earlier this season. And, when he plays, but not as well as he played earlier this season, well $1.9M for a backup isn't exactly Jamie Dimon money. The per-season-cap-hit isn't the issue either. It's the term. And the fact that there are three of them.

Backstrom is a career 2.46/.916 goalie. Good, above-average NHL goalie. Not elite, but not Oilers goalie-du-jour, either. This season, Backstrom is performing at a 3.02/.899 level. And that's after he's played better in his more recent starts. Well off his career levels. I know the stats don't tell the whole story, but is anyone who has watched Bax this season going to argue that he HASN'T been shaky? On the other hand, Harding has been a revelation this season. As alluded to earlier, his 1.66/.933 is obviously extremely strong. Particularly when benchmarked to his career numbers which, at 2.45/.918, are eerily similar to...Backstrom's (reminder: 2.46/.916). Granted, Harding only has 124 career starts to Backstrom's 377, but you get the point.

Wild fans have been at odds with the mean regression mongers at various points over the years. Frankly, mean regression is an observable thing. It's real. But it's not as predictive as the self-styled fancy math set like to think it is. At least not in and of itself. It's an inherently lagging indicator. So, both sides should probably settle down about it a bit.

The question is: to what extent will both players revert back (up, for Backstrom; down, for Harding) to their career averages? And here's where we (finally) get to the point of this post. The conversation around the Wild goalies is extremely convoluted. If Backstrom is now playing to a new (lower) level from which he will not be able to materially improve, then being tied to him for two MORE seasons after this - at a $3.416M cap hit - is onerous. Backstrom's cap hit is higher than Jonathan Bernier's, Corey Crawford's, Craig Anderson's, Ben Bishop's, etc. It's also higher than Josh Harding's. So, if we're going to get largely the same output from both of those guys, why are we paying one twice as much as the other? Well, one of the answers is that we might not be able to get the same output from both guys. To begin with, Harding could regress. That's obviously possible - and, if you don't think it is, you're wrong. In black and white, Harding's play so far this season is the exception within his career-to-date body of work, not the norm. And the other side is that clearly it's dangerous to assume that Hards will be available for an entire season at a time at this point. Harding is under contract through next season.

So, it's not as simple as 'just trade for Ryan Miller', even if Fletcher could somehow hoodwink Murray into giving us Miller for nothing. As big an issue as carrying three goalies is, carrying four is not any better. Obviously if you acquire a healthy starter, you can send The Cows back to Iowa. But, in order to really land in a better place, vis-a-vis goalies, with any kind of acquisition, we would need to net reduce the number of goalies on the roster. There are three now. You bring in a new guy, send Kuemper to Iowa, you're still at three. Yes there are other options (LTIR, for example), but the ideal would be to send Backstrom or Harding the other way. Well, Backstrom has a modified NMC/NTC, per Capgeek, and, when most GMs trade for a player they want them to be able to play - and that's the big thing with Harding, right? Tough situation for Fletcher.

The wild card here is Kuemper. After an ugly start to the season, he has been huge for the Wild since he took over as starter. His stats are good: career 2.21/.921, albeit with only 13 starts, but no worse than what we can expect from Backstrom or Harding over a normal sample. Of course, Kuemper may be playing to a premium right now, as well. That's certainly a possibility. You're asking a lot from a kid his age to step in and save a playoff team's season. But, I assume the big thing for him this season was to get lots of minutes at the pro level. Doing that in St. Paul vs. Des Moines - particularly when he's not just getting shelled (and risking his confidence) - might not hurt his development, long-term. There's no doubt that Kuemper has allowed Fletcher more time to let the situation (with Harding) work itself out, with the highest potential for the least amount of upheaval to the roster in the process.

In the meantime, if you read Elliotte Friedman's 30 Thoughts this week, you learned about another wrinkle in the economics that might be keeping trades at bay right now. And there's always the chance that a Miller goes to Sochi and comes back tired, or injured. Or, by the same token, that Sochi gives Harding the time he needs to get back on the ice. And, the final piece in the puzzle: the Wild is thriving right now. They're not going to finish above third in the division, fourth in the conference. But, when I look at the current wild card standings, currently no team below the Wild has a better 10-game record - that's big because it means separation.

I'm glad Fletcher has not sold off big pieces to bring in a goalie so far. I'm glad he didn't bring in Theodore. I don't want him to sell off big pieces to bring in Miller, either. This isn't the Wild's year. Get that stretch drive under Kuemper's belt, maybe a series or two, and try to time the run for a couple years down the road when Backstrom and Harding are no longer our problem. At this point, I'm as confident going into the playoffs with Kuemper as I am with Backstrom (due to his play) or Harding (due to his health). And the pieces we would have to give up to get a Miller might be useful in a couple years when this team should be bearing fruit.
Your Author: Nick in New York at 10:44 AM